Create an Account - Increase your productivity, customize your experience, and engage in information you care about.

John McGraw was the fiery, hard-hitting third baseman of the Baltimore Orioles in the 1890's, but he achieved much more recognition as an innovative, autocratic field manager. In his 30 years at the helm of the New York Giants, "Little Napoleon's" teams won ten pennants and missed the first division on only four occasions. He is credited with developing the hit-and-run and other strategic moves, but his forte was his uncanny ability to assess baseball talent.

John McGraw grew up in Truxton and later provided much support for the Truxton Giants. He is a member of the Baseball Hall of Fame and he is still, to this day, the most winning Manager in baseball history. John McGraw managed the New York Giants from 1902-1932. 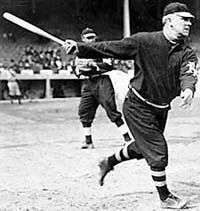 Note: A special "thank you" to Kathleen A. Sochia (email Kathleen), a direct descendant, who provided much of this information.